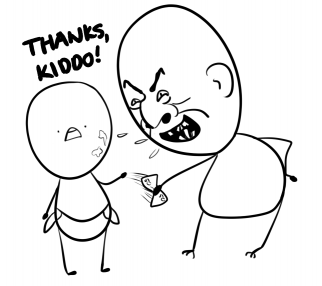 By Katherine Huang and Eileen Ong

While spending five dollars on a boba drink may be a reach for most students, a mere Lincoln pales in comparison to the absurdly high fees of standardized testing.

With constant emphasis on SAT and Advanced Placement (AP) tests for college admissions, it is difficult for students to avoid the hefty fees attached to it. College Board’s near monopoly over standardized testing places students in a position where they have no choice but to feed their wallets to the “not-for-profit organization.” The only alternative to the SAT is the ACT, but there is no replacement for the AP exams. According to College Board’s 2015 Form 990, they raked in over $915 million of revenue from their SAT and ACT programs.

For students who are not subjected to free or reduced lunch, their AP test fees approach and sometimes reach the daunting three digits; especially if they are taking and paying for multiple tests. Even if those students do not qualify for a reduced-price test, it does not necessarily mean they can comfortably afford a $94 test. The numbers alone are enough to discourage qualified students from taking the advanced classes but in addition to that, there is the wavering possibility of the ability or inability to pass the tests . AP tests seem like the golden opportunity to earn college credits to forgo introductory classes and save large amounts of money however, those benefits are only attached to passing. Failure of the AP test throws away the $94 (or more) into the trash and eats away at students’ self-esteem. The golden opportunity, then, would wind up a waste of money, time, and effort.

Furthermore, school expenditures and personal necessities pile onto the already costly tests. San Gabriel High School (SGHS) students who are active in clubs and school events would also need to pay for club and school gear, club dues, and fundraisers. It is even tougher on upperclassmen who have the prospect of prom or grad night ahead of them. The majority of SGHS is composed of relatively low or moderate income families and students and the participation of school events and tests cannot be luxuriously afforded. Combining school and test costs over the course of four years results in a large quantity of expenses that inevitably takes a toll on the wallet.

AP classes are established solely to prepare students for the end of the year exam. Consequently, there is a strict curriculum teachers are obligated to teach from in order to polish their students to pass the test. Even if students do not learn from the material and the way it is taught, the main objective of these AP classes is to pass the AP exam. The classes become more about how to beat the system rather than to educate.

As a nonprofit organization, College Board is supposed to use their surplus revenue to further achieve its mission to help students get in college. However, according to news platform, Patch, the College Board president David Coleman makes $1.3 million a year while its 23 executives receive an average of $300,000 annually. If College Board’s purpose is to truly help students, then its members should agree to cut their exceedingly high salaries to lower the ridiculously expensive testing fees.