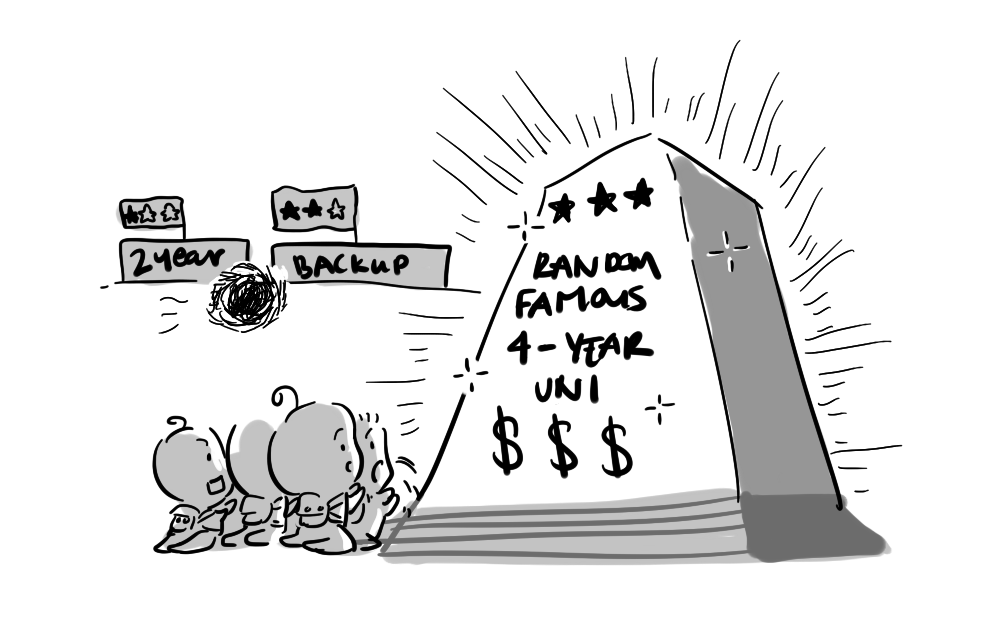 During college application season, seniors are faced with the difficult task of deciding which college they want to attend next fall. Many students dedicate their whole high school careers preparing for college—taking five AP classes or joining multiple clubs and organizations—to get into their dream school. It is a common belief that whatever college a student chooses determines how and what they will do in the future; attending a good school guarantees a path to success. However, this is a misconception. In hindsight, the college one attends has little to do with their career success.

Despite the argument that the better the school is, the higher the income, one study in 1999 by economists Stacy Berg Dale, MPA, and Alan B. Krueger, Ph.D showed that the income margin, when comparing students who attended more selective colleges and students who were accepted by comparable schools but attended less selective colleges, was close to zero. Someone who graduated with a bachelor’s degree at an Ivy League does not necessarily make them more qualified for a higher paying job than someone who graduated with a degree at a university. A bachelor’s degree only proves credentials, regardless of school. Famous people like Arnold Schwarzenegger, actor and former Governor of California, and George Lucas, director of the Star Wars, attended community colleges. Fame and wealth can be achieved, regardless of the school’s ranking.

Students are also less happy at elite schools compared to students at other colleges. Through a five-year time frame, The Harvard Crimson, the student newspaper, found that the Harvard suicide rate was almost double the national suicide rate. Furthermore, a 2012 Committee on Background and Opportunity Report conveyed that 35 percent of Princeton students said they developed a mental health issue after coming to campus. These depressing statistics are a result of the little-fish-in-a-big-pond effect. Attending an elite school exudes pressure onto the student to live up to the school’s reputation. While students may find themselves at the top of less selective colleges, students could be placed at the bottom of a more selective college, reducing their confidence and self-esteem.

Although some may argue that graduates from elite colleges obtain jobs easier, graduating from one is merely a badge of honor. The Nova Workforce Investment Board interviewed tech employers in Silicon Valley and learned that skills in technology and ability to work as a team were more significant while college degrees were rarely mentioned as a factor. Attending an elite school does not give an advantage in job applications and searches. However, before even finding a job, there is also the task of completing a degree at a more selective college. According to a Cornell research report, fifty percent of US STEM students drop out during their first or second year at an elite school, but every 10 point decrease in a school’s average SAT score increases degree completion by two percent. Before even considering finding a job, students must keep up with the rigorous curriculum and high expectations of an esteemed school.

Besides the top schools, students should expand their range of college choices and consider alternatives. Community colleges and California state universities, for instance, save a ton of money in the long run and allow students to explore new fields while providing a solid education and flexible schedule. In the end, it is not which college you go to that matters but what you make of it.