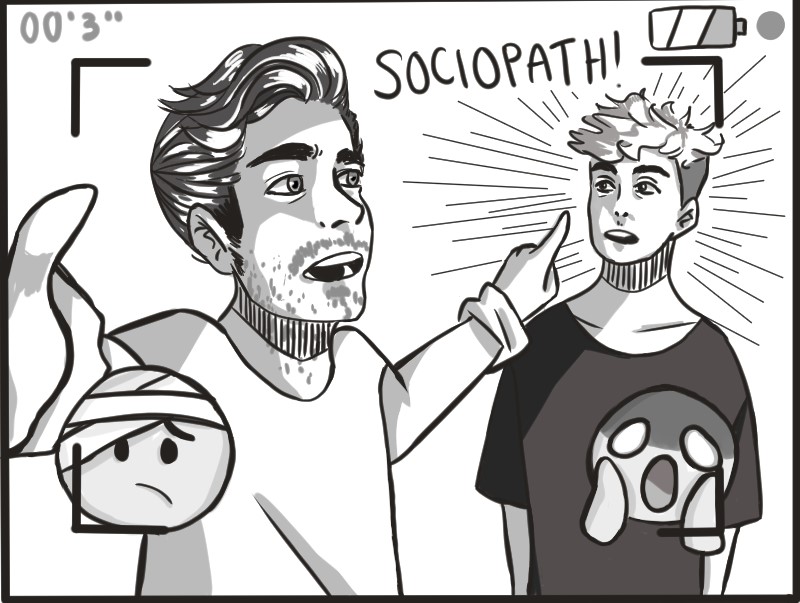 People often take issue with distinguishing the art from the artist. YouTubers rely heavily on views and sponsors; by checking their content out and rewarding them with ad revenue, a viewer supports them by default.

YouTubers have a great deal of influence over audiences young and old. Due to the pressure to stay relevant, the influencer in question may make contentious choices. Clickbait turns into breaking news after attempts to push the envelope are taken as triggering.

The most recent example comes from Shane Dawson, who released a controversial eight-part series about Jake Paul. He had originally planned a series directed towards the nature of sociopaths, but after a joking tweet later turned retweet from Jake Paul, he made different plans. The approach in itself is insensitive. Dawson however, takes it upon himself to self-diagnose and treat fellow YouTubers with therapy, claiming that YouTubers must have something wrong with them if they vent/rant for the world to see on the internet. What Dawson fails to realize is that he only defeats the purpose of therapy if he draws them back to the source of the problem: vlogging their personal lives for views and profit.

A therapist known as Kati Mortin was consulted and included throughout the series to show a professional’s viewpoint. However, fellow therapists have spoken out in criticism regarding her approach to antisocial personality disorder (ASPD). Paired with Dawson’s “horror” style edits, the video series only elevates the stigma that already surrounds the mental disorder. A therapist/YouTuber that goes by “hiyeonni” commented in her response video that sociopathy is not as talked about in comparison to mental issues like depression and anxiety. This rings true and confuses the audience when it comes to distinguishing sociopath from psychopath.

Not all sociopaths nor people with sociopathic tendencies are “evil.” According to a web article by Better Help, traits include the disregard of social norms, a deceptive nature, aggressive behavior, lack of remorse, and irresponsibility. The degree with which people have this disorder varies from person to person. Dawson and Mortin’s informal discussion regarding ASPD gave the impression that the world is raided with monsters when many of us have long been living with these people. Intentional or not, Dawson has promoted a culture of self-diagnosis where viewers begin to classify YouTubers and others as carriers of this mental disorder.

Viewers should take what they watch online with a grain of salt. This is especially true when it comes to YouTubers, who care more about view counts for the sake of profit. Sources are not fact-checked adequately at times which results in misinformation. Furthermore, regardless of YouTuber preference, viewers should take care to dissociate content from the artist.