It was either having slanted eyes and living in Mexico or living in the U.S. but not “looking” Mexican. Comments related to my distinguished roots or eccentric appearance made me feel excluded. My sensitivity was steep, and those words cut deep.

In Mexico, I was constantly asked, “¿Hablas Español?” (Do you speak Spanish?). Timidly, I would take a long pause before answering, “Sí,” (Yes). They were astonished that I, an Asian, could. But I was unsurprised because every encounter I had yielded this same reaction.

Everywhere I went, eyes followed me in every direction. Even when I didn’t make eye contact and ignored their tracking gazes, I always felt judged when looking at their emotionless expressions.

After sixth grade, my parents decided to move to the U.S. I wondered whether I would still be the odd one out and surely, I once again found myself alienated. Although not brought up as much, my Mexican roots were still mentioned when I first moved.

I distinctly remember when a substitute teacher took attendance and called my name. He didn’t recognize me and asked where I was from. Shyly, I said I was from Mexico. I heard laughs spiraling and echoing the room, growing stronger and wilder. I didn’t know why they were laughing at me. Maybe they thought I was joking? Whatever it was, I was severely hurt. I sobbed endlessly until the bell rang, and all I could think of was getting home and feeling the comfort of my mom’s arms hugging me. I realized that living in Mexico and the U.S. wasn’t all that different.

Despite this, I have fond memories of people reacting to where I’m from. I always talk with my family in Spanish, and because of that, some people overhear and immediately ask us where we’re from. When we say from Mexico, they smile and chuckle sweetly.

In the U.S., I can immerse myself in my peers’ diverse cultures and they can learn more about mine. Meeting diverse people allowed me to begin loving my heritage and roots. I realized that my “differences” did not make me peculiar.

These events made me emotionally stronger and able to love both sides of me. The languages, the foods, and the traditions of both cultures are now something I look forward to learning more about. My cultures have shaped me into the person I am now. 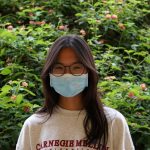