When I was four years old, I saw Indiana Jones, Raiders of the Lost Ark. I was amazed and inspired to recreate one of my favorite scenes at my daycare, Child Time, the next day. As a kid, I had trouble distinguishing people from imaginary characters. I daydreamed so much that usually, out of boredom, the people I knew would transform into imaginary characters, and I’d start to interact with them differently.

It was usually harmless. But that day was different. I wanted to recreate the Indiana Jones scene where, tired and in a crowded street, Jones shoots the master swordsman who challenged him to a fight. I was Indie (Indiana for short), and the swordsman was my friend Chauncey.

I don’t remember much of Chauncey, but he was my friend. I just went up to him, told him I was his friend, and he just accepted it. So there he was, banging toy trucks together when I snuck up behind him. I grabbed a long tree branch (the ones daycare advisors repeatedly told us NOT to pick up) and swung it at him.

I whacked him like an owner hitting his dog with the newspaper, and he recoiled in defense. He was beaten and injured, his arm dotted with tiny red branch marks, and I might’ve left a long red line across his forearm. He was confused, crying.

“Why did this stranger hit me?” he probably asked himself.

Not more than five yards away, a daycare adviser saw the carnage and sprung into action. That’s when I blacked out.

Sometimes, I wonder if it even happened. A few years later, I came across Chauncey again. I made sure to make amends with him, telling him I was sorry for hitting him with a tree branch.He had no idea what I was talking about, but he accepted my apology nonetheless.

It just scares me sometimes. I used to tell that story a lot to my friends and family, but not even Chauncey of all people knew it happened. Maybe he just had a bad memory, or maybe it was all in my head, regardless, I make it a habit of remembering what I did nowadays. So I do not have another problem like what surrounded Chauncey again. 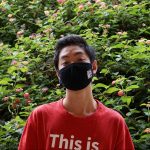