The movie opens with a female narrator (Fala Chen) talking about the legend of the 10 rings and Wenwu (Tony Leung), the man at the center of it all. In his search for even more power, Wenwu went to the magical village of Ta Lo, where he met Jiang Li. The two fall in love and have Shang-Chi (Simu Liu). We then see Shang-Chi as an adult encountering a few members of the Ten Rings, which leads into an action-packed adventure in order to save the world.

Of course, the film is not perfect and has flaws of its own, including Katy’s (Awkwafina) character. At some points, I struggled to see Katy as someone more than the cliché “best friend or comic relief” character. She is often used as a tool to break the tension in a scene with humor, becoming a character that is hard to respect.  She was not necessarily unlikeable, but as a main character, she does not seem to have much depth and seems unnecessary to the actual plot. However, this is only the first movie that Katy is in, and I hope to see her more throughout the MCU as a developed character.

I found Shang Chi and the Legend of The Ten Rings impressive because it manages to incorporate Asian culture from an Asian-American perspective while still keeping the feel of an MCU movie. I had seen reviews that criticized the film’s involvement in Asian stereotypes, like Asians being great at martial arts, and was initially worried about this before watching. However, I think the movie does a good job of balancing this cliché out. The fact that Shang-Chi is a martial arts master is not the whole of his personality, but more of a trait that enables him to be a superhero and stand out from others. Additionally, subtle details, like Shang taking off his shoes before entering Katy’s house, showed how attentive the creators were when integrating Asian-American lifestyles into the movie. I thought the movie was a great start to Asian-American representation in mainstream media, hoping for many more cultures to be explored soon.

I have already watched Shang-Chi twice since its release, and I would definitely watch it a third time. I highly recommend the film and can definitely see it being enjoyed by any audience. The action scenes were impressive, and I could see the hard work put in by the actors in order to perform them. I think the movie was a monumental stepping stone in Asian American representation in mainstream media, and I hope to see other films learn from it in representing minorities. Shang-Chi never felt too American to stray away from its source material, and it never felt too Asian to alienate its target audience. A great way to describe Shang-Chi and the Legend of Ten Rings is “Perfectly balanced, as all things should be.” 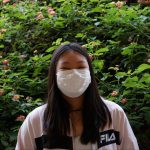