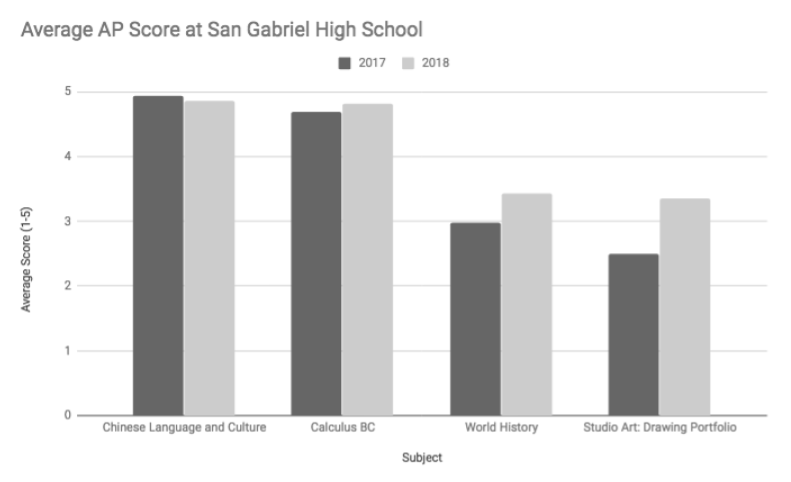 According to the AP Give-Year School Score Summary (2018 edition), the percentage of total Advanced Placement (AP) students with scores of three or higher in San Gabriel High School in 2018 was 67 percent, a two percent increase from 2017. This percentage is also higher than the California percentage, 64 percent, and the global percentage, 61 percent. However, when different subjects (Language, Math, History, and Sciences) are taken into account, the average test score varies.

Among all AP classes and test scores, the average score for the AP Calculus BC test in 2018 was 4.82 out of 5, which increased by 0.13 from 2017. Among the 34 students who took the test, 30 students scored a 5 on the test. Math teacher Huong Tran is commonly credited among students for preparing her students well for the AP tests.

“I think it’s just the high standard that I keep, and we work really hard [and] have a lot of tests, pop quizzes, [and] tutoring after school,” Tran said. “I think you have to hold [students] accountable and [convince] them as well. So I [convince] them [by saying] that to them [passing AP tests] will save you money and time.”

Among the other subjects, the average score for the AP Spanish Language and Culture test in 2018 was 3.60. Spanish teacher Eliana Deniz said that she had an advantage with the students she worked with.

The average score for the AP World History tests in 2018 was 3.43, which increased by 0.45 from 2017. During the past two years, the AP World History and US History curriculums were changed, causing teachers to integrate different methods of preparation for the AP tests.
“Some of these changes [in test scores] could be the result in changes in the courses themselves, the college board requirements,” Osborne said. “A couple years ago, they changed it for AP US History, and then two years ago, they changed it for AP World History.”

“I emphasize a lot of reading and [discovered] that kids that take the AP tests in any topics seriously tend to be the ones that will study and do the reading that is necessary,” Whitman said.

Osborne also believes that the role of a student is often overlooked into how well they score on the AP tests.

“If your teacher is organizing a course in such a way that is following the College Board curriculum, then as a student, your responsibility is to keep up on the work,” Osborne said. “Don’t get into the habit of procrastinating and doing everything in the last minute. For a lot of the AP subjects, repetition is an enormous benefit.”