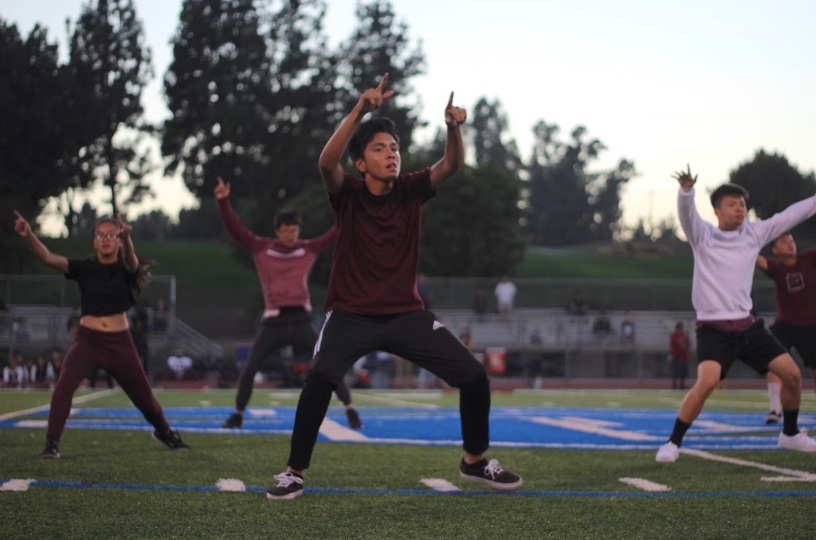 With their first performance at homecoming rally in almost five years, All Male gets the crowd excited with their latest routine as they danced to hit songs “Take You Down” by Chris Brown and “Sicko Mode” by Travis Scott featuring Drake.

In addition to being their first homecoming rally performance in a while, the members of All Male felt nervous and excited to perform with their secret female guest, senior Vivian Nguyen who has been dancing with the team behind the scenes ever since her junior year and was given an opportunity to dance with them for homecoming rally.

“Honestly, I was really excited to perform with Vivian,” first-year All Male member junior Levin Chang said. “The only thing I was worried about was whether or not she would be feeling distant from the team or felt judged by everyone else.”

With only a few weeks after fall rally to get their performance ready, the members of All Male felt the pressure to deliver a routine that would leave an impression on the student body as they were not given the same amount of time to prepare compared to fall rally.

“Learning and cleaning the pieces in a few weeks time was really stressful, especially because our team is fairly inexperienced in dance,” All Male leader sophomore Kenny Chai said. “We had to have four to six practices a week [and] adding practices on the weekends. We haven’t performed for homecoming rally in a really long time because there [wasn’t] enough time between fall rally and homecoming rally to prepare.”

The homecoming rally was also the first time that the current team performed on the football turf.

“Dancing on the turf feels extremely different from what we usually dance on,” Chai said. “Some moves that were intended to be simple were difficult because it was hard to get around. I personally felt that dancing on the turf also made it more tiring and hard to go full out.”

Despite the pressure of having less time to prepare a routine, All Male is now aiming to perform at homecoming rally every single year.