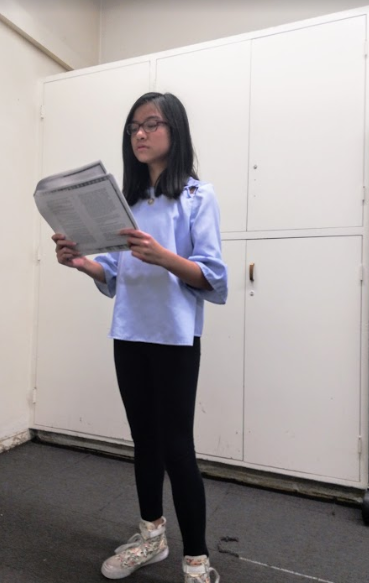 Driven by her zeal for theatre and acting, freshman Vivian Phan auditioned and seized the role of one of the main characters in the upcoming school production, “The Miracle Worker.” The production will take place in the Little Theater from Dec. 4 to Dec. 8.

Even at an early age, Phan was determined to make her mark on the world and get her name out there.

“When I was little, I was the kind of kid who was like ‘oh, one day, I’m going to be a superstar’,” Phan said. “Eventually, it just turned into something that I could actually do.”

As Phan’s interest in theatre grew, so did her desire to pursue more challenging endeavors, such as auditioning for a high school play. In order to so do, she had to challenge herself to try a different type of acting that she had little experience with.

“It was kind of scary, because I’ve never actually done a real audition before,” Phan said. “But it was fun, because I think the auditions were a little bit out there. It was [improvisational acting].”

As a result, Phan had to think on her feet. This was easier for her because she previously attended acting classes, which offered her an extra boost of confidence and experience.

“Before I took [the acting classes], I was very timid and shy,” Phan said. “And now, I think I’m more out there. I’m not as afraid and I think that really [helped] me get the part.”

After discovering the news that she received the major part of Helen Keller in the production, Phan was filled with excitement. Two to three hours of Phan’s daily routine was then dedicated to rehearsals and preparation for the opening night, which is her favorite part of theatre.

“[I enjoy] rehearsing with other people,” Phan said. “You do all this work, and you get to know all these other people. Eventually, the time for the show comes, and it’s like everything that you [have] worked so hard [for is] finally coming true. You get to show other people what this whole other world is, outside of what our regular lives are.”

During the late evenings spent after school rehearsing, Phan made new friends and was able to connect with them through their shared love for theatre and the play.

“I used to be really lonely before,” Phan said, “and as I got more into theatre, I found more people who were more like me, and it was easier to make new friends that [way].”

With the support of her parents, Phan wants to pursue a career in the theatrical arts and follow her passion, regardless of the obstacles she may encounter along the way.

“Just get out there,” Phan said. “Nobody’s going to judge [you]. It’s a [truly freeing] experience.”