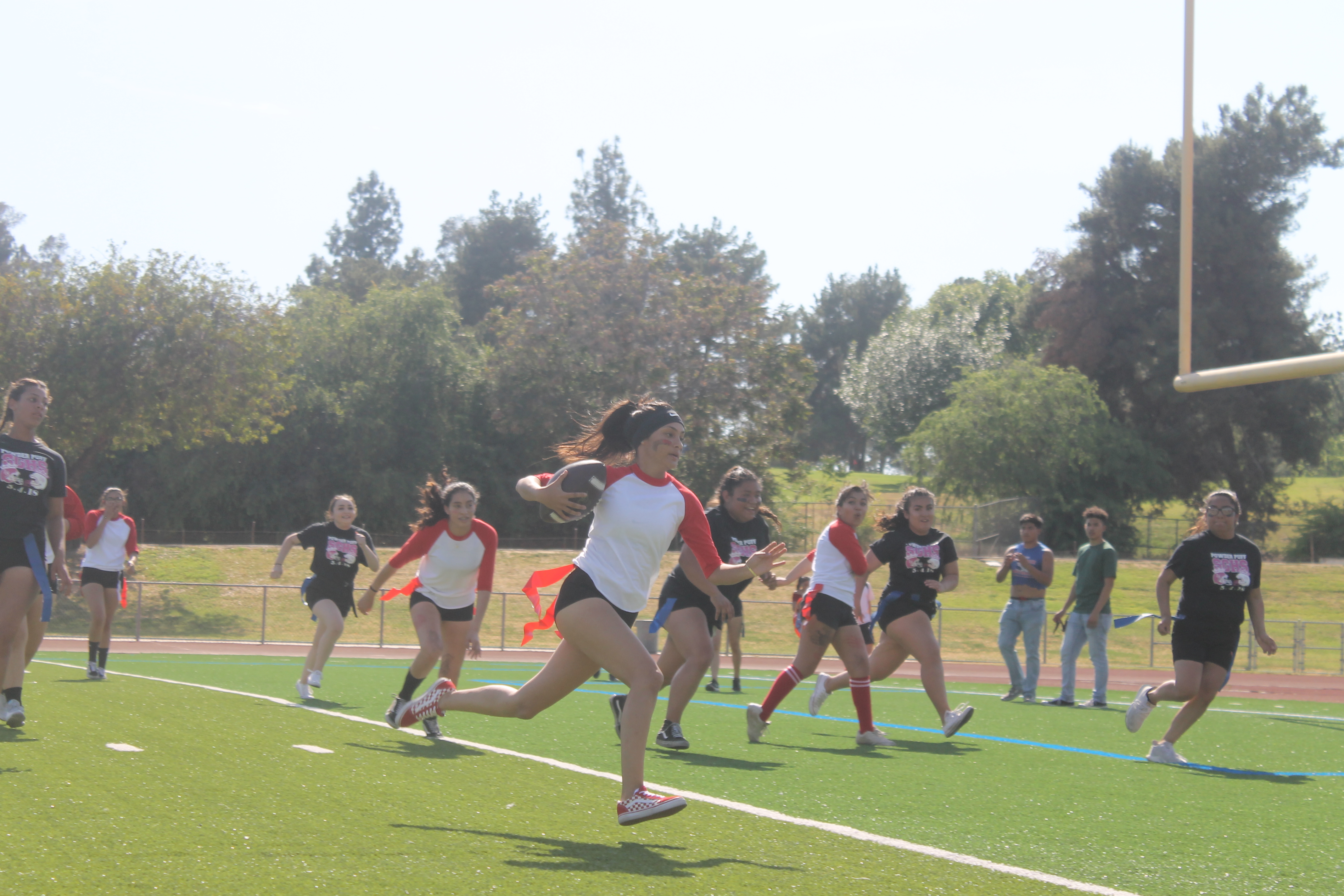 The untouchable seniors snatched a total of four touchdowns, closing the Powderpuff game with a steady score of 35-7. With the sunlight projecting onto the football field on May 4, the classes of 2018 and 2019 girls went up against each other in the long-awaited flag football game.

“Before [the game], I thought we were going to do [well], because we practiced over break and we got really good compliments from the coaches,” senior Lopez said. “[The juniors] had such a big squad, but we were really something. We went in really confident and strong. Just because our squad was small, didn’t mean that we were not going to come in strong.”

With the intense fusion of cheers and applause from classmates, staff, family members, and even a group of boys in cheerleader clothing, the first quarter was about to begin. The ambitious players focused. The usual scoreboard set. The enthusiastic crowd was ready.

First quarter flew by while harboring several incomplete passes, out-of-bounds plays, and the initial advantage to the seniors. Despite the game being an incredible tug-o’-war game for both sides to be consistent with a lead on the other, in roughly 10 seconds counting down to halftime, the seniors’ stride skyrocketed up to a score of 21-0 due to Cabrera’s two back-to-back touchdowns before halftime. Everyone went wild.

“This is my first powderpuff game. I didn’t get to experience with it last year, because I was injured,” senior Cabrera said. “It felt pretty cool, because you know—it’s a boy’s sport—so it is not really known for girls to do a touchdown. My goal was obviously to win with my friends and ,just to have fun and make it a memorable moment.”

Following the halftime huddles and reassurance, perfect passes outnumbered fumbles and incompletions. Both sides were really close to changing up the scoreboard. And then, the juniors scored: Khem made a touchdown in the fourth quarter and the hyped up crowd nearly sprang for joy.

“I felt very surprised and I was actually really happy, because we were pretty down in the first two quarters,” junior Khem said. “My goal was to actually try to win this game and help my girls out as a team.”

With one additional touchdown from the seniors, the game seemed settled for the juniors. But, Rendon came in soaring on the field in the last few minutes of the game, making stunning attempts to steal the win from the seniors.

“The anticipation of the game and practicing scared me,” junior Rendon said. “I actually did well [and] I think we did our best.”

The Powderpuff game had ceased with a 35-7; however, even in the event of a loss for the juniors, Khem remarks that “it was a great learning experience.”

“We will be back next year,” Khem said.