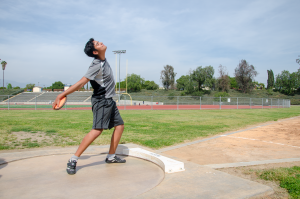 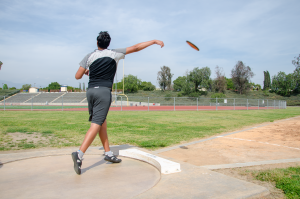 Track and field is a sport with a lot of athletes, but one aspect of the sport is not looked upon often: throwing (throws).

Throws consists of four different competitions: shot put, discus, javelin, and hammer throw. However, shot put and discus are the only events participated in at the Matadors’ meets. Both use a range of techniques—regular power, throw, half turn, step turn, and full spin. For shot put specifically, there is a glide whose purpose is to achieve one goal: to throw the greatest distance.

The moment track and field is brought up, running is what mostly comes to mind, but throws is rather significant because compared to running and jumping, throwing practices balance.

“The spin technique is the hardest technique, mainly because it’s so precise,” senior throws captain Eric Avina said. “The technique that is taught to all beginners is the power technique. It’s not that complicated ”

For the power technique, throwers stand aligned with their left toe and right heel, then put weight all onto their right knee. Quickly after, their hips are twisted fast and weight must be shifted to the left knee while the discus is being released.

With the football stadium scattered with people, a small but noticeable area is filled with objects being smoothly thrown. Senior Jocelyn Phuong, who has taken part in throws since her sophomore year, saw an opportunity, took it, and uses it to improve more and more.

“I found out about it when I went to track practice after cross season was over,” Phuong said. “I was gonna do running, until I saw people throwing. It looked really fun, people were spinning. Even though I get dizzy really easily, I think I’ve gotten better.”

Whether there is a stampede of athletes on the track or one athlete on the field, throws is a simplistic yet challenging event in the spring sports season.