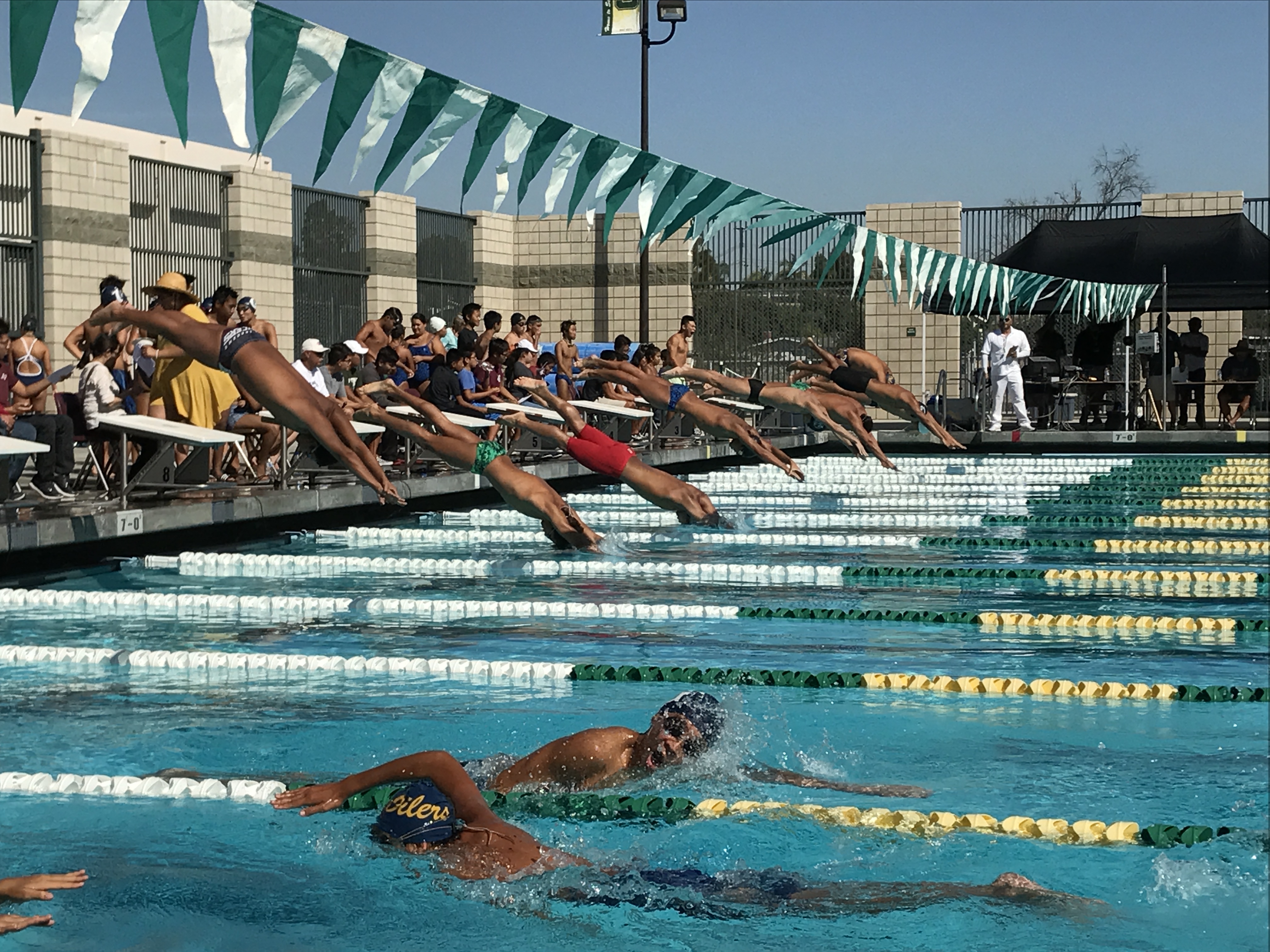 By Nian Capili and Kim Ta

With plenty of wins and losses against multiple schools, the swim season increases the exhilaration of the meet at Schurr High School for prelims and finals.

Coming into the preliminary round, both Mark Keppel and Gabrielino lies on the first and second place as a whole of the league so far up until May 3. As the prelims began to be conducted and off, a majority of teams were warming up as well as the coaches preparing to time their teams. It was time. The message of there being five more minutes left until the first event: 200 Individual Medley (IM) Relay, was announced across Schurr’s Aquatics Center.

Despite the scorching hot weather, everyone was hyped and adrenaline rush worthy as the countdown of the announcement drown the noises of the crowd to the referee saying “Swimmers, take your mark.” Approximately at 2 pm, San Gabriel’s 200 IM Relay Junior Varsity (JV) girls team was off in the backstroke. Up next was the JV boys and then both Varsity girls and boys respectively. Though Mark Keppel and Gabrielino conquered almost every event, San Gabriel came in third (JV girls), second (JV boys), fourth (Varsity girls), and third (Varsity boys) for that first event: 200 IM relay.

“During prelim, I was determined to make finals and was hyped for my individual events,” senior swim captain Tommy Vo said. “I fell short by one for both my individual’s races but it didn’t bother me because I still had my relay team.”

Throughout the whole event of prelims, the Matadors competed with heart as they performed proficiently against all schools within the Almont League. Individually, each swimmer gave their best effort despite the distraction of the electrified crowd of parents, friends, and teammates. One event that took San Gabriel by storm was the 500-meter freestyle, led by sophomore and varsity swimmer Ronald Young. Young demolished all competitors swiftly as he took first place for that event, building up the score for San Gabriel.

Junior and varsity swimmer Brenden Duong commented on their team’s performance saying that he feels great. “I think everyone tried their hardest even when we saw very talented people who were literally two times faster than us.”

Although San Gabriel didn’t place to their expectations, the Matadors are still optimistic and filled with motivation in order to fulfill their goals. Junior and Varsity swimmer Fatima Uc also commented on her expectations next year for the swim team.

“As an individual and as a team, we need to focus on our times, skills, strokes, and to improve our weaknesses so we can become a stronger team/individual.” Uc said, “We need to stop slacking off and actually practice during practice.”

After prelims, finals came and a good chunk of swimmers qualified for the finals in their respective events. When the water began to cool down and the sun began to go down, all 42 swimming events ceased this year’s Almont League and San Gabriel took fourth.

“Varsity continues to improve and we sure are looking forward to our junior varsity swimmers filling in the gap of the varsity leaving,” Coach Tamara Cognetta said. “ I look forward to the existing team members to come back next year. I think that our team has a lot of enthusiasm and I think that we should continue to. I think everyone should learn how to swim.”